​A Note About Photos: The photos here have been saved lower resolution to speed up process time. If you'd like a copy of any photo, email us at oakmontlawnbowling@gmail.com and, if we have it, we'll send you a higher-resolution picture.

We still aren't back up to our pre-Covid attendance figures, but we had a good turn-out and a wonderful party. The evening began with music and mingling while the gifts were wrapped. Then a good selection of pasta and salads. Tables were decorated by our social committee and one lucky member received a free year's membership. After dinner, Jim Krause and Steve Pickell gave out the tournament awards. Then Jerry announced the volunteer of the year. Looked like almost everyone stayed to clean up after. What a wonderful group!

And now, thank you's. I KNOW I've missed people. Just let me know and I'll get this right.

Our social committee is stupendous, wonderful and fantastic. Thanks to Pam Dempsey, Linda Pickell, and Marilyn McKeever for doing so much to make this happen. Thanks to Jeana Garcia for the slide show with the best of the best photos from 2022. Thanks to Pam, Linda, Marilyn, Jeana and Mary Blake for making the gift tree happen. Thanks to the sea of volunteer gift wrappers who took our gifts and made them look beautiful. Wrappers included: Diane and Kirk Vandagriff, Linda Goodwin, Liliane Rains, Marilyn and Jerry Garland, Diane Ethier, Steve Wallace, Janet Johnson, and John Jay. AND virtual hugs and kisses to all of you bowlers who bought gifts.

Thanks to Bonnie Johnston and ​Marilyn McKeever for greeting us as we came in the door and to Greg Goodwin for serenading us as we settled in. Thanks to Steve Pickell for overseeing trophy distribution. Thanks to Jim Krause for emceeing (and sneaking into almost every picture and taking a good number of awards).

​Here are the photos:

We had a beautiful day for our tournament. 18 bowlers, 3 rinks, 3 winning teams. Steve P and Pam D mixed things up quite a bit by having us throw 2 jacks. We didn't center them. We then scored each jack as though it was on it's own. That means that a bowl that was close to both jacks could be counted twice. In one case, the jacks were close enough that the 4 bowls closest to one were also closest to the other, giving the team 8 points. And the opposite could also happen, where one team had 3 bowls on one jack and the other had 3 bowls on the other jack, so they canceled each other out (OK, yes, you had to be there to understand). What was interesting to me was having so many non-centered jacks. It was greet training for fine-tuning your bowling. And, of course, a bit frustrating, too.

But I was bowling I didn't do a great job of taking photos so here's what I got:

Thanks to Diane and Linda P for the photos!

Thanks to Pam Marsh for these BRILLIANT photos!

Teams were:
Kevin, Marilyn and Rob vs. Denise, Janet and Mary
Steve, Jodi and Steve vs. Jerry, Bonnie and JB
Jim, Mark and Liliane vs. Francis, Ande and Linda

Steve P and Pam crafted a very interesting tournament. We played 3 4-end games and changed rink and position between each game.

We had 24 players making 8 3-person teams. The winners were the 4 teams who earned the most points in the 3 games.
​

From our substitute reporter Jodi: Jim K and Richard are this year's Vet/Novice champs. Final score was lopsided, but the first half of the game was very close. Half dozen plus in the viewing gallery for the match.  (Photo by Jodi.) 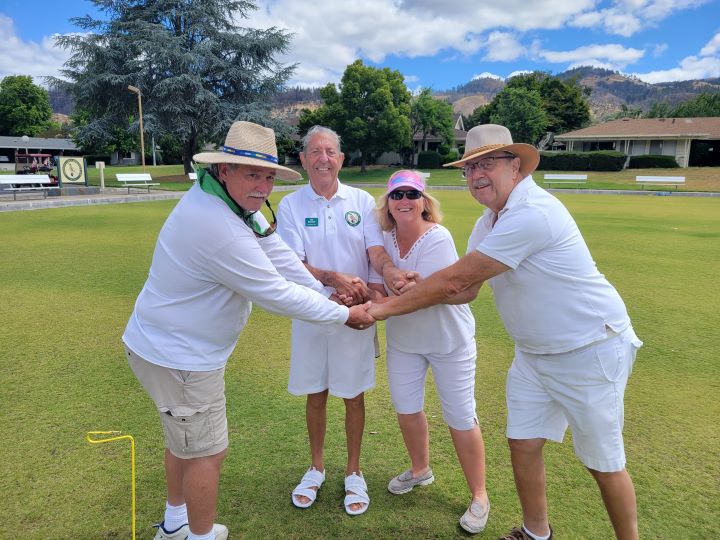 Our first tournament of 2022 had 24 bowlers spread out over 4 rinks. It was very cold and very windy. I suspect a few knees were knocking out there. We also had our first spider of the year.

We had 8 men this year. Steve, Jim K, Tom and Francis were the winners in the first round. Jim K probably thought he was lucky to face a very new bowler, but Richard bowled very well and gave Jim a true battle - which was just a taste of things to come. Jim faced Steve in the semi-finals, winning by 2 points in the 21st end. Then Jim faced Tom and, again, won in the 21st end.

Semi-finals were cold and gray and then smoky. Final winners were Tom's team: Tom, Marilyn and Liliane.

It's been much too long since our last Demo Day. This time, at least 22 people showed up to learn about the game and 18 have signed up for lessons. Thanks to everyone who came out and helped make this event so successful. Special thanks to Tony and Mark for organizing.

Great food and a wonderful turn-out. Who could ask for anything more?

First round winners were (1) Jim K with Paul, (2) Jerry with Rob, and (3) Phil with Mark. Jerry's team will face Phil's some time after July 21. The winner of that round will face Jim K and Paul. Thanks to Jodi and Jeana for photos!

Thanks to Mary and Jeana for photos.

The photos here show each bowler with their opposition. So, leads are with their opposing leads, skips with their opposing skips. That's really how we play. In pairs, the skip and lead are like ships passing in the night. The skip might try to give a quick encouraging comment or a fist bump, but your opponent is the one you really get to visit with.

The winning team: Tom and Janet

It was early on a cold morning when some brave volunteers showed up to help with the verticutting. The result? Better work and OVA saved money!

After THREE power outages and some voluntary evacuations we rescheduled Halloween for November 8th. The first place team, with the most points, was Jim K, Jeannette and Ted. Second place team, with biggest spread, was Francis, Marilyn and Jim B. Third place team was Jerry, Kathleen and Topher.

May 8, 2019 to November 9, 2019
We had a trip to the fjords, a bad fall, an serious illness and a move to Florida. And yet these women persisted! Final game was played on November 9, 2019. Marilyn and Pam defeated Jeannette and Janet!

September 24, 2019. Four teams: Teams with skips Jim M and Francis won the first round. Francis and his team won the final round to be champion of the men's triples! ​(Thanks Jeana for taking the photos!)

Day TWO: This was an incredibly close match with brilliant bowling on both sides. I was bowling one rink over and kept on hearing oohs and aahs and the spectators (I counted 13 at the end) watched each time out do the other. Finally, the winning team was Denise (skip), Ande (second) and Sue (lead).

July 4 2019
​OLBC is a truly wonderful group of people. Here's what it's like to get a group photo:
Rest of the photos from the Independence Day Tournament:

The photos for the Senior Games are in several slide shows, from "Getting Started" to "Awards Ceremony". If you don't see what you're looking for, scroll on down. Also, just email me (Mary) at OakmontLawnBowling@gmail.com if you'd like a full-sized version of one of these photos. I had to make them small for the website, but I have larger versions of every one of these pictures.

Photos here are by Bev Shelhart and Mary Blake.